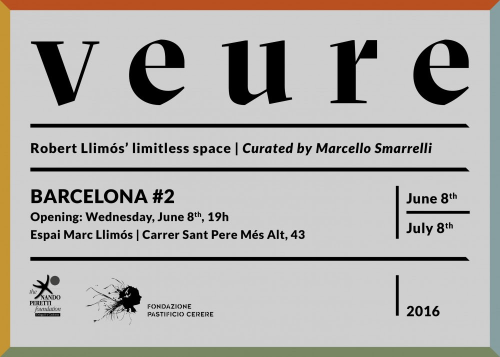 Marcello Smarrelli, curator of the exhibition, presents "Veure #
2, Robert Llimós’s limitless space" in the own Home and Studio
of the artist.

Barcelona, June 8, 2016. Marcello Smarrelli, the curator of the exhibition Veure # 2,
Robert Llimós’s limitless space, has presented this morning the surprising exhibition
project of the international Catalan artist Robert Llimós. Llimós lived in 2009 an
experience that marked him forever and changed the subject of his work. After going
out for a walk in a Brazilian town he saw UFOs. In one of them, there was an open
window and inside, two figures were watching him, something like a man and a woman
with long necks and scaly skin. There, he took some notes and once he came back to
Barcelona he began to focus on representing that vital moment. You can visit the results
of this work in Barcelona in the space Marc Llimós, the home and studio of Robert
Llimós: c / Sant Pere de més alt, 43. From the 8th of June to the 8th of July, from 16h
to 20h and Thursday to Sunday.
For Marcello Smarrelli and, citing the words of the vice director of the Nando Peretti
Foundation, Antonella Dentamaro, " Aliens, this "strangers" represented by Llimós, are
similar to our current historical moment, where everything seems to be focused on our
confrontations with what is strange and different... The two figures that observe us from
that spaceship are not so different from those people that reach Europe shores on
unsafe ship". The project is sponsored by the Nando and Elsa Peretti Foundation,
Delegació a Catalunya, and organized by the Fondazione Pastificio Cerere and has
the support of Barcelona City Council.

Veure # 1 is the first step of the project, which was exhibited in Rome and presented the
latest works focused on the representation of alien figures through paintings and
sculptures.
Veure # 2 is the second step and exhibits both the last production and a selection of
works belonging to the historical production of the artist. On this occasion, it is located
in the studio where Llimós lives and works, which becomes an inner way into his
personal and artistic life.


Thus, the Fondazione Pastificio Cerere and the Nando Peretti Foundation, Delegació a
Catalunya, pay tribute to 40 years career of the artist. The first phase of the exhibition
has been presented with great critics and audience success previously in Rome from
March 15 to April 16, 2016. The project, entitled VEURE, benefits from the
collaboration of the architectural firm stARTT for the installation in both locations. The
exhibition of Barcelona, which also has the support of the City Council, has been
designed to work the verticality of the ladder as a metaphor with things coming out
from darkness to light, with lights that guide you through a single exhibition space
which allow the access to the artist's home.
Llimós presents more than 50 works -including paintings, sculptures, prints and
drawings- which represent, almost obsessively, creatures from different galaxies, with
enigmatic, melancholy, haunting and familiar appearance. Despite this anthropomorphic
appearance we are constantly asking ourselves about alien. This discussion on the
existence of aliens, always present and open, is encouraged by continuous studies and
witnesses. This is a fascinating subject because our approach to reality divides the
public between skeptics and "faithful".

The exhibition invites us to reflect on human condition. We are used to analyze the
universe and ask questions according to our own point of view. Llimós suggests new
levels of interpretation of the reality around us and some ideas to try to make sense. At
VEURE # 2 works create a retrospective tour that reaches the port city where we can
admire the most important Llimós’ public works, the dreamy silhouette of Miraestels
(2006). The retracted figure in this monumental sculpture directs his gaze upwards,
almost to make contact with aliens who are in the exhibition.

think global, act local
LOGIN| PRIVACY| LOGOS
you are here: Home  > All news > VEURE # 2 is inaugurated in Barcelona as a "metaphor about the unknown"